PROMPTS/PROPS: Wear a tool belt or carry a tool box.  May dress like a worker or handyman.

We have all heard the story that when he was a young man, Jesus learned to be a carpenter from his earthly father Joseph.  It was very common for young men of that time to follow their parent's job and learn how to do that job as an apprentice.  So we always think of the early Jesus as a carpenter.

The word in the Bible that is translated "carpenter," could also mean builder or handyman. So it is possible that "carpenters" were the type of people you called when something needed to be fixed, whether made of wood, stone, or some other material. We don't know for sure that Jesus was trained as a carpenter by Joseph, but it was common practice at that time and at that place.

Handymen are something special.  When something needs to be fixed or is broken, we are always looking for that person or handyman who can repair it, make it work or whole again.  Do you mom or dad sometimes look for someone to fix things around your house?  Well back in the time of Jesus, he would have been that person to make things right or better.

The Bible isn’t clear if Jesus did any carpentry work or handyman stuff after his ministry began.   However, Jesus spent the remainder of his earthly years fixing the brokenness of humanity.  Jesus began to fix people when they were broken and needed repairs.  In fact, the repairs Jesus made on the souls of people were far more important than anything he fixed that was made out of wood or stone.

Here is my last Bible verse: "Healthy people don't need a doctor, sick people do. I have come to call not those who think they are righteous, but those who know they are sinners." (Mark 2:17)

So the next time you need something fixed in your own life, the best repairman around is that Jewish carpenter Jesus. 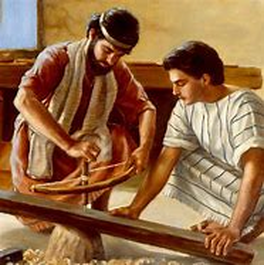